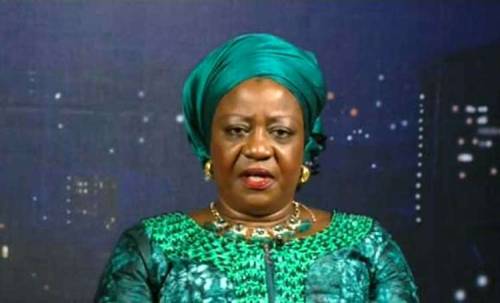 President Muhammadu Buhari’s aide Lauretta Onochie’s hope of clearance by the Senate to become a commissioner with the Independent National Electoral Commission (NEC) has dimmed.

The Senate panel that screened her may have recommended her disqualification, it was learnt Monday night.

In the same boat with her is the North Central nominee, Prof. Sani Mohammed Adam, whose nomination might also have been rejected by the Committee.

The fate of these two nominees out of the five sent for clearance by the President, is now to be decided by the Senate plenary.

The Senate committee of the whole, which is expected to receive the screening report from the Kabiru Gaya Senate Committee on INEC this week, will take the final decision.

The plenary hardly turns down its panel’s screening report.

Sources said the Senate panel accepted the argument in one of the petitions against Onochie that her nomination is in violation of Section 14 (3) of the 1999 Constitution on the Principle of Federal Character.

A highly-placed source said: “Apart from the allegation of partisanship, a major problem with Onochie’s nomination is that it was not in line with the Principle of Federal Character.

“There is no room for another nominee from Delta. The state cannot occupy the two slots meant for the Southsouth. Section 14(3) of the 1999 Constitution does not allow that. If her appointment is challenged in court, it will be nullified because it is in breach of the constitution.

Section 14(3) says: “The composition of the Government of the Federation or any of its agencies and the conduct of its affairs shall be carried out in such a manner as to reflect the Federal Character of Nigeria and the need to promote national unity and also to command national loyalty, thereby ensuring that there shall be no predominance of persons from a few states or from a few ethnic or other sectional groups in that government or in any of its agencies,”

“The source added: “In fact, this breach of the constitution is more fundamental than the allegation of partisanship.

“Onochie has a big hurdle which may not make her to scale through screening.

“And public opinion has weighed heavily against her. Clearing her will portray the Senate as anti-people when democracy is about people’s will.”

Investigation also confirmed that, Prof. Adam, has a legal hurdle to cross.

It was gathered that when he was a lecturer at the University of Jos, he had an issue which made him to seek legal redress in a Federal High Court. He won the case.

But the university management went to the Court of Appeal which reversed Adam’s High Court victory.

The two parties are now before the Supreme Court.

”Since it is a fundamental moral issue and the Court of Appeal judgment is yet to be vacated, the Senate Committee cannot clear him.

“The preponderance of opinion at the committee level is that Adam should wait till the Supreme Court clears him before seeking a sensitive appointment like INEC national commissioner.

“Some committee members believe that in the light of Section 14(2) (b) of Part 1 of the Third Schedule to 1999 Constitution, Adam ought not to be cleared for the appointment.

“The section says: “There shall be for each state of the Federation and the Federal Capital Territory, Abuja, a Resident Electoral Commissioner. They shall…be persons of unquestionable integrity.”

But one of those pushing for Adam said:  ”Apart from being a Senior Advocate of Nigeria, he was Deputy Vice Chancellor (Administration) of the University of Abuja.

”He has a rich pedigree to occupy the office of INEC national commissioner. Those after him are only desperate to ruin his career.”

Onochie’s nomination attracted criticisms having been accused of being a card-carrying member of the ruling All Progressives Congress (APC).

She denied this, saying she ceased being an APC member since 2019.

Apart from the opposition to her nomination by political parties and civil society organisations, a former Chairman of INEC, Prof. Attahiru Jega has warned that the clearance might affect the credibility of the electoral commission.