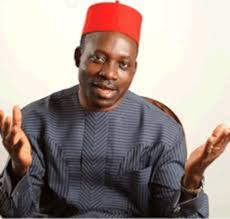 Amid the raging leadership crisis rocking the Anambra State Chapter of All Progressives Grand Alliance (APGA), the Independent National Electoral Commission (INEC) has thrown its weight behind Victor Oye-led faction of the party.

The commission, in a list released, yesterday, said the party, led by its National Chairman, Oye, is the only recognised leadership of the party.

Both Oye and a faction led by Jude Okeke had been laying claims to the leadership of the party. INEC had on Wednesday declared that APGA risked disqualification for the November 6 poll due to its failure to notify the commission before it purportedly held the ad-hoc congress to elect delegates for the primary.

MEANWHILE, the APGA governorship candidate, Soludo, has solicited co-operation from fellow contestants at the just-concluded primary to move the party and Anambra State forward.

Soludo, in his acceptance speech immediately he was declared the winner at the party’s primary in Awka, said: “Let me offer my hand of fellowship, and look forward to a partnership with all of you for greater APGA and Anambra State.

“The government over the next four years will have to lay the foundation for the Anambra Vision 2070. Ours is a land of infinite possibilities and opportunities.

“We need continuity, consolidation, and transformation to build on the existing foundation and maximise potentials. We need to unite and mobilise the creative energies and capital of the people all over the world as well as other investors to live out the essence of our motto: “Light of the Nation.”

Soludo assured that if given the mandate, he would deploy all the global and national experiences and networks as well as local knowledge/experience as a village boy to make Anambra people proud.

“We won’t take any vote for granted. We will work hard to earn every vote. We will triple our efforts and campaign everywhere and reach everyone. Our target is not only 21/21 local councils, but 326 out of 326 wards and breaking the one million votes mark in a free, fair and transparent election,” he added.