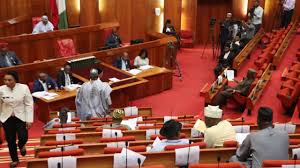 The issue of insecurity in Nigeria, is one that need’s solutions that will be enduring and make the citizen and the international community have confident in the democratic system in our country.

Some senator spoke on separate interview on what they feel’s is the way forward. Worried by the rising insecurity and the helpless situation the federal government is faced, some senator aired their views on the creation of state policing, which according to them is the only way from the insecurity quack Miah we are currently faced with.

Senator Istifanus Gyang from plateau state, said the federal government can no longer guaranteed effective policing of the nation with the current structure of federal policing.

In his word “We have called for the alterations of the constitution to make for the creation of the state police to meet up with the challenges of the time.

“It is obvious that the current federal structure has not been able to effectively combat crime and criminality.

“We need to carry out the alterations of the constitution to empower states to establish the police command across the country so that the state chief executive and the legislature at that level would be able to effectively address the issue of crime and criminality.

“Some people have exercised fears over the possible abuse of such power but we have a state legislature which is expected to act as a check.

“We should allow the system to start and grow over time. We cannot out of fear refuse to progress as a people.

In another development, the senator representing Osun central, senator Ajibola Basiru, he said the state police is the only option that will effectively neutralized the insure of insecurity in the country.

He said, “I am fully in support of it.  I have a bill on it. It is before the ad hoc Committee on Constitution Review, it has passed second reading.

“We cannot tackle insecurity in Nigeria without the creation of state police.

“The argument that governors would use it to oppress people is even insulting the sensibility of our people.

“How can you call governors state security officers without the power to control the security apparatus of the state?

“The states have courts, they should have their own police too. If the establishment of state police would lead to oppression, can’t they use the courts to also oppress the people?

The argument of abuse can be countered by the rule of law and respect for fundamental human rights.

Senator Smart Adeyemi, of Kogi state, said both state and local government police should be established. He said if Nigeria will have peace, the state should be allowed to have their own police for effective policing of communities

He said, “The idea of a state police is almost inevitable now but we must streamline it so that they won’t use it to oppress the people.

“They must be totally independent, and their jobs should be to tackle insecurity.

“Every state operates vigilante and hunters group. We cannot run a unitary security system because of our ever-increasing population.

“For a complex and diverse nation like Nigeria, we should relieve the Federal Government of the pains of policing every nook and cranny of the country.

“There should be state and local governments police with defined structures and functions that would not be abused.

“There should be a state police commission that will be independent of the state government that would not be abused.

“We can’t be hiding under one finger; we can’t pretend,  every state in Nigeria is facing security challenge.

“The major problem confronting the President Muhammadu Buhari’s government today is insecurity. We must be courageous enough to tackle it.”

In what looks like a counter statement senators Ali Ndume (Borno) and Abba Moro from (Benue), both, kicked against the establishment of state police. They instead  suggested the need to strengthen the current unitary system of policing.

Ndume said, “The problem is not about state police. The creation of state police will not solve insecurity,  rather the Nigeria Police Force should be strengthened to do their job well.”

Moro said, “ I am not in support of state police. It will be abused by some governors. Recognition should be given to vigilantes and other community-based security outfits to provide useful information to the police.”