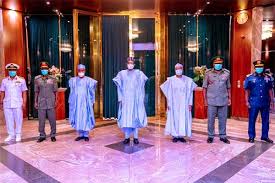 President Buhari said it has not been easy to fulfill the promises he made to Nigerians when he was seeking for their support in 2015, which were to secure the nation, revive the economy, and fight corruption.

In the President statement by his Special Adviser on Media and Publicity, Femi Adesina, he said “We’re in a state of emergency. Be patriotic, serve the country well, as your loyalty is to the country.”

The president used the opportunity to congratulate the service chiefs on their various appointment “There’s nothing I can tell you about the service, because you are in it. I was also in it, and I will pray for you. I also assure you that whatever I can do as Commander-in-Chief will be done, so that the people will appreciate your efforts.

He also used the occasion to charge the service chiefs to be up and doing as regards the moral of their men and officers, he said the men and officers should be made to feel physical and professional secure.

The president pledged the federal Government commitment in the area of proving cutting edge equipment and logistic that will ease their operations.

The minister of Defence. Major-General Bashir Magashi (retd) led the new service chiefs to the meeting.