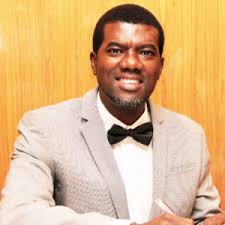 There have been wide spread conversation on the former president of Nigeria Goodluck Jonathan running for president in 2023, the former  aide Reno Omokri to the president has come out to debunk the rumor.

Reno said the present Governor of Kaduna state will never be a running mate to the former president if he ever wish to run come’s 2023.

He said they are more people that are more competent that Nasir El-Rufai, he also said his former principal has no intentions to dumped the people democratic party.

There have been consultation and political permutations among the ruling Party APC and the main opposition the People Democratic Party ahead of the 2023 general elections and there have also rumored that the Governor of Kaduna Nasir El-Rufai, who’s second terms also comes to an end come’ s 2023, will be his running mate.

Jonathan was the president of Nigeria between 2010 and 2015, he lost his second term bid to the incumbent president Buhari in 2015, and constitutionally, he is eligible to contest for another four years in office. In 2023, the incumbent would have served a two terms which is mandatory for any individual seeking the officer of the president as enshrined in the 1999 constitutions.

The ruling party has been seen of late visiting the former president in his Abuja resident, the outcome of their various meeting is unknown to the general public.

The former aide to president jonathan. Said the rumor that his former principal will be running with Nasir El-Rufai, the governor of Kaduna state will never work. Omokri said “They are trying to put that story out there to put pressure as to promote Nasir El-Rufai as a presidential candidate.

The former aide said his former princeipal will never leave the people’s democratic party, which he has been a member all his political life.

“The best judge of future behaviour is past behaviours. Former President Jonathan has been in one party all through his life. He is 63 years old and he doesn’t have that kind of history. He doesn’t have that kind of reputation. To the best of my knowledge, former President Jonathan is not leaving the People Democratic Party, He is a very loyal man just like me,” he said.

As monitored in one of Nigeria’s electronic news media