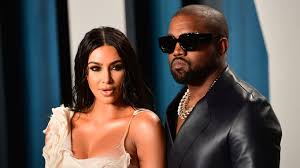 Kanye west marriage for six and a half years is heading to a bricks, source familiar with the family confirmed that the wife Kim Kardashian West has filed for divorce.

The divorce was reportedly filed by Kardashian, in a Los Angeles Superior Court. This development will brings to an end to one of the famous celebrity union of the 21st century.

The union was an envy of most celebrity, who was look up to them for direction as regards the marital institutions, the union was between a reality TV superstar and a hip hop and a fashion mega-mogul.

The married that too place in Italy in 2014, is blessed with four children, North, Saint, Chicago and Psalm. It was actually the first marriage for the 43 years old west and the third for the 40 years old Kardashian.

Their dating started in 2012 and they had their first child in 2013, the giant screen at the empty waterfront ballpark of san Francisco Giants was used by West to propose to Kardashian in 2013, and 2014 may, 24. the two got married, in a ceremony at a renaissance fortress in Florence, Italy.

If the litigation is granted, the two will be going their different ways, soonest.