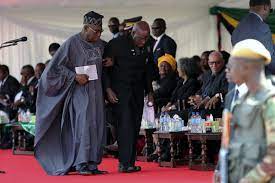 Former Nigerian President, Olusegun Obasanjo says the death of Zambia’s founding father and long-term leader, Kenneth Kaunda, has ended a long list of African leaders who fought colonialism and took over the reins of power at independence.

Obasanjo in a statement he issued on Thursday evening, said Africans should be consoled by the fact that Kaunda who died at 97 is taking a well-deserved rest.

“The demise of President Kaunda at the grand old age of 97 years brings to end the pioneers and forefathers who led the struggles for decolonisation of the African continent and received the instrument of Independence from the colonial masters in Africa,” he said of Kaunda who ruled Zambia for 27 years.

“Let all Africans and friends of Africa take solace in the knowledge that President Kaunda has gone home to a well-deserved rest and to proudly take his place beside his brothers such as Jomo Kenyatta of Kenya, Kwame Nkrumah of Ghana, Julius Nyerere of Tanzania, Habib Bourguiba of Tunisia, Léopold Sédar Senghor of Senegal, Nnamdi Azikiwe of Nigeria, Ahmed Sékou Touré of Guinea, Félix Houphouët-Boigny of Côte d’Ivoire, Patrice Lumumba of Congo, Nelson Mandela of South Africa to name but a few.”

The former Nigerian leader described these nationalists as people who toiled to see to the development of the countries and the continent at large.

“We are consoled that God granted President Kaunda a long life to witness the progression of Africa through five decades of proud and not-so proud moments,” Obasanjo added

Recalling his visit to Kaunda in 2015 in Lusaka the Zambia capital, he said they discussed a wide range of issues affecting Africa.

But, he said the late Kaunda was disappointed at how the continent has fared despite the sacrifices of the freedom fighters in Africa.

Obasanjo said, “I asked him if the Africa that we have today is the Africa for which he and his contemporaries struggled and fought. President Kaunda was visibly pained in his response and at some point he broke down and wept. It was obvious to me how disappointed he was about some of the challenges that have plagued our continent for decades since independence.”

He noted that Kaunda’s death should remind Africans of the vision of a free, strong, united and prosperous continent the pioneer leaders had for the people.
“Let us, African leaders and people, never let the labour of these heroes’ past be in vain,” he said.