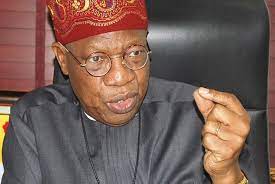 Information and Culture Minister Lai Mohammed, on Saturday denied allegation of diversion of the Kwara state 2019 All Progressives Congress (APC) general elections campaign funds. Rather he revealed that he singlehandedly raised all the funds for the prosecution of the elections in the state. Alhaji Mohammed was responding to Kwara state Governor AbdulRahman AbdulRazaq’s recent allegation that said cabals within the party who received hundreds of millions of naira as donations for the Kwara election did not deliver a kobo to him.

The governor added that he was not involved in the composition of the campaign structure he was asked to fund. The minister said the last membership registration and revalidation in the state was a charade, saying no congress would take place in the state until all members are duly registered. He said he got that assurance from the acting National Chairman of APC, Mai Mala Buni. The minister said this in Ilorin, the state capital while addressing members at the new state party secretariat in GRA.

He said: “I never diverted APC 2019 general elections for my personal use as alleged by Kwara state Governor AbdulRahman AbdulRazaq. By the grace of God I singlehandedly, with the support of friends, politicians and family raised all the monies for the Oke-Ero/Isin/Ekiti/Irepodun Federal Constituency by-election of November 2018 that brought Hon Tunji Olawuyi to the House of Representatives. And I challenge anybody here to say he gave the party one penny apart from what I gave them.

I want them to explain to Nigerians about what happened to the N70 million that Hon Olawuyi kept that the governor refused to give us during the by-election. But for the grace of God and some friends that would be no election in November 2018, because when we raised money we gave them but two days before election we could not reach them through their phones again. I had to go to friends to raise another N150 million to prosecute that election.

“We thank God today that was the beginning of our success. When elections proper came we did not see our governorship candidate. We could not wait. I say without any fear of contradictions that by the grace of God with the money raised from friends, colleagues and associates, we financed the four elections and we scored 100 percent. I remember the governor called me after we won the first election to ask if it was true we won the by-election. And I told him ‘yes sir.’

“He said ‘I want to apologise to you that when you came to me for money they told me not to give you money. They told me you are a Lagos politician, that nobody can defeat Saraki.’ But then we did not know that God will bring more wonder. That is how we won all the elections. But they got there today and forget the people that put them there. They are now selling lies. They are selling dummies. It didn’t take me long to know we have entered one chance. If we did not give money to the party, how did he think the party won?”

“About two weeks ago myself in the company of for governorship aspirant Prof Shuaib AbdulRaheem and other went to meet with the chairman and he assured us that Kwara state is a special case and there will be no congress until we are all registered. And we believe him. When they come, please come out in your thousands and let them know where the power lies.”