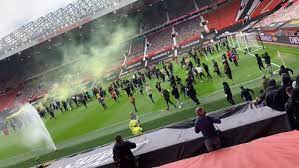 Manchester United’s clash with Liverpool on Sunday has been postponed after United fans stormed onto the Old Trafford pitch to protest against the Glazer family.

More than 1000 protesters were seen carrying flares on the pitch and demanding that the family leave the club following their scheme to join the failed European Super League.

Fans initially blocked gateways and entrances to the ground before breaking into the stadium, with one supporter even seen climbing on the goalposts.

A United statement read: “Following discussion between the Police, The Premier League, Trafford Council and the clubs, our match against Liverpool has been postponed due to safety and security considerations around the protest today.

“Discussions will now take place with the Premier League on a revised date for the fixture.

“Our fans are passionate about Manchester United, and we completely acknowledge the right to free expression and peaceful protest.

“However, we regret the disruption to the team and actions which put other fans, staff, and the police in danger.

“We thank the police for their support and will assist them in any subsequent investigations.”

Supporters have never accepted the Glazers due to their leveraged takeover in 2005, which plunged United into debt (net debt stood at £301.7m in the last quarterly figures) and, as reported by The Guardian in October 2018, their ownership has led to more than £1 billion being drained out of the club in interest charges.

Although it has been listed on the New York Stock Exchange since 2012, the Glazers retain majority ownership. The Glazer family also owns the Tampa Bay Buccaneers.