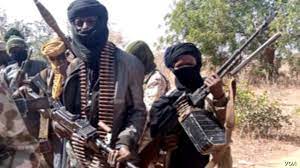 Armed bandits have reportedly attacked a military base in Zazzaga community, Munya Local Government Area of Niger State, setting the premises on fire.

News men gathered that a civilian identified as Jacob Auta was killed during the incident.

The attack which occurred at about 3pm on Wednesday, has created tension in the area.

Our reporter gathered that the gunmen invaded the camp, shooting sporadically as soldiers also engaged them in a gun duel.

The bandits also stole a military vehicle from the camp.

A source revealed that some of the bandits were killed by soldiers in the gun duel that lasted for over an hour.

The state’s Police Public Relations Officer, PPRO, ASP Wasiu A. Abiodun was unable to take calls and could not respond to text messages forwarded to him.

NB- drop your comment, this issue is becoming embarrassment to our country, is the government really do it best to curtail the situation..