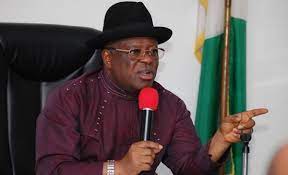 Ebonyi State Governor, Dave Umahi, says his people have no land to give out for cattle ranching.

Governor Umahi stated this on Monday evening while appearing as a guest on Channels Television’s ‘Politics Today’.

Umahi said each state in the South-East already has laws banning open grazing  and as such, it is way off as he is a servant to his people.

“This is not about the governors, it is about the people, so, whatever position the people take in this regard, that is what will happen. There is no land in this regard that is not owned by individuals, corporate bodies.

“So, this is beyond governors and that is the truth. People calling governors are making a very grievous mistake. Even if I say as a governor in South-East, I want people from this village, I want you to donate this land, the question is: will they allow it?

“I have heard about three communal crisis in my state, and it is all about land. There is a place that I am building a medical university and the people of that village, for a project that is almost completed, went and brought it down. They prefer to have their farms than a medical college. So, the land is a different ball game altogether,” Umahi stated when asked whether he would provide land for ranching as a governor.

Earlier in the year, Southern Governors banned open grazing of cattle across states in the region and urged the President to address Nigerians on the state of the nation.

The governors also called for the restructuring of the country to address increasing agitations in different parts of the nation, while restating their commitment to the unity of the country.

In reaction to the ban, the presidency said the governors failed to provide any solution to the lingering crisis between farmers and herders in the country.

Seeking to profer the needed solution, President Muhammadu Buhari in a recent interview stated that the government will return to a practice in which herders will ply designated grazing routes across the country.

The President said the Attorney-General of the Federation, Abubakar Malami, has been asked to begin the process to see how these routes can be legally put back to use, a directive which has not gone down with many Nigerians, with some claiming that the insisting on open grazing  points to a hidden agenda.