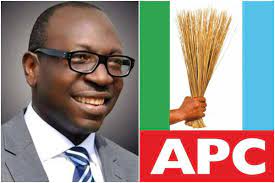 Edo State chapter of the All Progressives Congress (APC) is currently emerged in crisis over N200 million election funds meant for the Edo Professional Drivers on Wheel.

This indication emerged yesterday when a chieftain of the party, Mr Adam Ehigiamusoe, in a press briefing, alleged the party’s governorship candidate in 2020 Edo governorship poll, Mr Osagie Ize-Iyamu, of embezzlement of fund meant for the elections.

Ehigiamusoe who is the president of the Edo Professional Drivers on Wheel, said Ize-Iyamu’s interest in the APC is self-serving and not for the growth of the party.

He said the money meant for his trade union to mobilise for the governorship election was never released and that Ize-Iyamu held on to the fund in spite of all entreaties to get him release it.

Meanwhile, Ize-Iyamu has denied the accusations, describing them “as manifestly false.”

In his reaction through a statement issued by Mr John Mayaki, Ize-Iyamu said at no point before, during, or after the campaign, did he met with Ehigiamusoe, whether in person or proxy, to offer such “outlandish promise.”