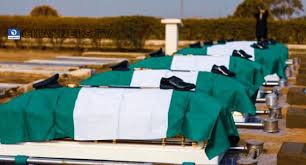 The Nigeria Air Force (NAF) Beechcraft King Air B350i which crashed in Abuja on 21th of February 2021, was on a mission to Niger State for the rescue of the abducted student, of Government Science College Kagara, Niger State.

However, the officers involved in the crash has been laid to rest at the National Military Cemetery in Abuja, along Airport Road.

A lot of military personnel were present including the  Chief of Air Staff (CAS), AVM Oladayo Amao, who in his statement said the officers paid the supreme price in the service to the nation.

“I stand here today bearing my personal grief as well as the entire NAF and the country as we lay to rest the remains of our fallen colleagues while in active duty to the service of their fatherland.

“I must confess that even at this moment, NAF is still in palpable shock and grieving very deeply upon this loss of our gallant and courageous heroes,”.

He further said the death of airmen and officer should be a stimulus towards making sure the fight against crimes and criminalities are holistic in all spheres of Nigeria circle.

Chief of Air Staff (CAS), AVM Oladayo Amao, eulogies the officer and commended their courage and determination to bring to an end the crimes that has bedeviled Nigeria.

He reminded all, that there is a life after death, and every man most give account of his stewardship to the creator. He added that the officers died during efforts to secure the release of the staff and students abducted from the Government Science College Kagara, Niger State.

He assured, all that the Nigerian Air Force will ensured that the souls of the departed officer did not die in vain. He went on to promised their families of continued support, in other to lessened the burden of does they left behind.

A prayer was offered for the remains of the late officers souls  to rest in peace, by the Director Nigeria Air Force Chaplaincy Protestants, Group Capt. Dogo Gani.