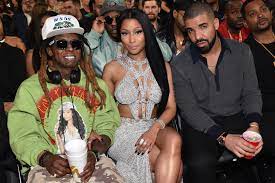 Nicki Minaj has delivered the first-ever streaming release of her iconic 2009 mixtape ‘Beam Me Up Scotty.’

The rap superstar also included some new songs on the mixtape, including a track called “Seeing Green” featuring Drake and Lil Wayne.

In addition to the collab with Drake and Lil Wayne, the updated version of the mixtape features two other new tracks: ‘Fractions’ and ‘Crocodile Teeth (Remix)’ with Skillibeng.

The project was released on April 18, 2009, and marked Nicki’s third mixtape. It spanned 23 tracks, including ‘I Get Crazy,’ ‘Itty Bitty Piggy’ and the ‘Best I Ever Had’ remix and featured contributions from Drake, Lil Wayne, Gucci Mane, Busta Rhymes, Rihanna, and more.

Prior to the mixtape and new songs’ streaming release, Minaj revealed that a new album is “coming soon.”

Since releasing ‘Yikes’ last year, Minaj has featured on a number of tracks. In May, 2020, she hopped on Doja Cat’s ‘Say So’ remix (which earned Nicki Minaj her first No. 1 single). Since then, she’s appeared on 6ix9ine’s track ‘TROLLZ,’ A$AP Ferg and MadeinTYO’s ‘Move Ya Hips,’ Ty Dolla $ign’s ‘Expensive,’ Mr Eazi and Major Lazer’s ‘Oh My Gawd’ and Mike WiLL Made-It’s ‘What That Speed Bout?!’

Minaj released her most recent studio album ‘Queen’ in 2018. Late last year, HBO announced a six-part documentary series about Nicki Minaj. A release date and title for the series have not yet been revealed.