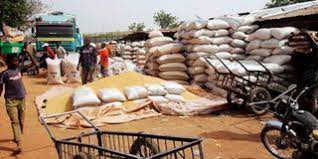 Nigeria aims to attain self-sufficiency in the production of maize by 2022, given a remarkable increase in the output over the past six years, the country’s central bank chief said Thursday.

At the launch of the 2021 maize wet season farming and first maize pyramid in Nigeria, Godwin Emefiele, governor of the Central Bank of Nigeria, told an audience in the northwestern state of Katsina that the aim of becoming self-sufficient in maize production would be achieved through a synergy between the government, stakeholders, and resilient farmers.

The remarkable progress so far was achieved with the support of the Anchor Borrowers’ Program (ABP) of the President Muhammadu Buhari-led administration, said Emefiele.

Through the ABP, he said, the country’s top lender would support farmers in cultivating over 500,000 hectares of maize in 2021.

With a population of about 200 million, Nigeria must end food import which has continued to drain the country’s external reserve and create unemployment and a disruption in the commodity value chain, Emefiele added.

Nigeria’s Minister of Agriculture and Rural Development Muhammad Nanono told a workshop in Abuja on March 30 that about 5 billion US dollars’ worth of food is imported yearly into the most populous African country.