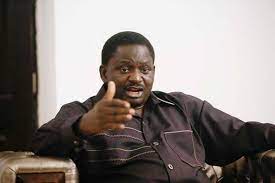 The Special Adviser to the President on Media and Publicity, Femi Adesina, says the Nigeria Government is not interested in naming and shaming sponsors of terrorism.

Adesina, who made the remark on Monday during an interview on  Channels Television’s Politics Today, monitored by Africa Giant News, he  stated that the government would rather prosecute financiers of insurgency in court.

“You will see that the United Arab Emirates has given some names and the Attorney-General of the Federation (AGF) has reacted to that matter, saying that in due course, all these people will have their dates in court. Rest assured that these people will be dragged before justice and justice will have its way.”

Asked if the government investigates suspects before they are made to face trial, the President’s spokesman replied in the affirmative.

He explained that the Economic and Financial Crimes Commission (EFCC), the National Intelligence Agency (NIA), and other security agencies were working to get verifiable evidence aginst the suspects before their arraignment in court.