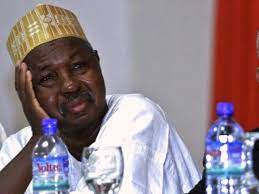 Gov. Aminu Masari of Katsina State says with determination and perseverance, Nigeria will conquer all odds and become more stronger in Africa.

Masari made the remarks on Monday in Katsina, when he received a delegation from the House of Representatives on sympathy visit to the state over the fire incident at Katsina Central Market and House of Assembly.“We believe some of the problems the country is going through, is part of growing up.

“Looking at history from various parts of the world, countries have gone through worst situations and have emerged stronger, more united, more determined and purposeful.

“I do believe, with determination and perseverance, we can conquer all odds.“Because we have the ability, the capacity, the resources, both human and otherwise to deal with the current situation.

“And God willing, we will deal with it squarely for the benefit of our country and Africa as a whole,” he said.

Masari said Nigerians needed to focus on solving the country’s problems without blaming others, adding that the situation requires more unity and collective action.

He said that people should stop blaming others but face squarely the challenges bedeviling the country.

“We have strategic position in Africa in terms of population, resources and capacity to salvage our nation,

” Masari said.The governor urged the National Assembly to provide the needed leadership and support to address the challenges of the country.

“In the House of Representatives, there is no any section of the country that is left out, the aggregation of whatever you do, will impact positively on the country,” he noted.

Earlier, the Deputy Speaker, House of Representatives, Mr Ahmed Wase, said that they were in the state to sympathise with the government and people of the state over the recent fire incidents.

Wase told the governor that the delegation was constituted by the Speaker, Mr Femi Gbajabiamila to commiserate with the government over the incidents.

He prayed to the Almighty Allah to avert future occurrence.