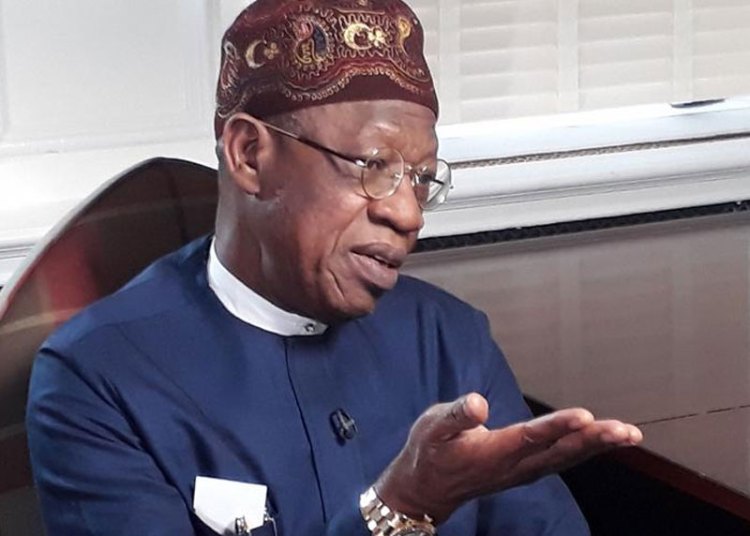 The Nigeria Guild of Editors and Nigeria Union of Journalists have urged President Muhammadu Buhari to call the Minister of Information and Culture Lai Mohammed to order.

In a statement on Wednesday, the General-Secretary of NGE, Mr. Iyobosa Uwugiaren, said the media leaders found it “extremely hard to agree with the Special Adviser (Media) to the President, Mr. Femi Adesina, that the presidency has no hand in the proposed media amendment bills before the National Assembly.

He insisted that if the president has no hand in the bill, he should ask Mohammed, who is his employee to hands off the matter also.

He said: “We insist that the current attempts to criminalise journalism practice in Nigeria will have terrible, huge consequences on our democracy; because an independent press, which the federal government is trying to crush, is one of the indispensable pillars of democracy.

“The media is referred to as Fourth branch of government because it also supports the balance of power in the government. Without a vibrant and independent press, the whole idea of a democracy system of government begins to deteriorate and after a short period the democracy will crumble.”

He argued that the concept of a free press was purposefully and deliberately invented to preserve freedom of the people, adding that when freedom of the press is threatened, it is a threat to growing democracy.

NUJ has also asked the promoters of the bill to suspend the plot especially now that the presidency has denied involvement in the obnoxious bill.

NUJ President, Mr. Chris Isiguzo, spoke while reacting to the denial by the presidency that they had no hand in the plot.

Isiguzo said having denied involvement, the presidency should follow it up by calling the minister of information to order since it is the same government.

He said: “We expect the president to quickly call his minister and all those behind these obnoxious bills to order. They should withdraw the bills and ensure that relevant stakeholders are engaged properly before thinking of any amendment.

“Of course, our position is clear. You cannot embark on an amendment that will directly impact us without getting us involved. It’s the same as shaving a man’s head in his absence.

“Denial is not just enough, let the presidency call its officials involved in this anti-people journey to order.”

He said the media is not afraid of any amendment or regulation but that stakeholders must be allowed to regulate the industry as is the practice in other climes.

“By the time, we agree on the most appropriate template, we’ll now restart the process. But for now, the entire process should be stepped down,” Isiguzo said.