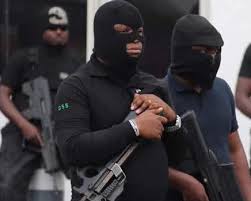 The Egbeda community was thrown into pandemonium when the secret police stormed the environment on July 14th, in search of indigenous people of Biafra (IPOB) members in the area.

In recent time, the Nigeria government has clamped down heavily on the separatist group who are seeking separation from the Nigeria state.

After the arrest and repatriation of the founder Mazi Nnamdi Kanu, a British Nigerian political activist, the Nigeria government vowed not to leave any stone unturned till all the members of the proscribed indigenous people of Biafra are apprehended and prosecuted.

According to an eyewitness who narrated the invasion at Egbeda, a suburb in Lagos state, to our reporter, he said the secret police stormed the area heavily armed, which caused a lot of panic in the area.

Our reporter later found out that the home of one Mr. Ejike Osita, whom they suspected to be the zonal coordinator of the proscribed indigenous people of Biafra (IPOB), Egbeda zone was invaded but Further findings suggest that Mr. Osita had travelled out of the country few months before the invasion of his house. We also learnt that his younger brother was arrested and his cousin who tried to scale through the fence was shot in the leg by the trigger happy security operatives. According to our reporter, they are also suspected members of the proscribed group.

All efforts to reach the state police formation and other security agencies to ascertain what truly transpired proved abortive as our calls where not picked and text massages unreplied.