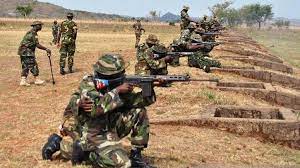 In a statement on Thursday in Benin, Maj. Ojo Adenegan, Assistant Director, Army Public Relations of 4 Brigade Nigerian Army, said that the exercise would last until Friday.

Adenegan said that the exercise was part of the training schedule for 2021, geared toward enhancing troops’ proficiency in weapon handling and marksmanship with fire arms.

“This is geared toward combat readiness and preparation of troops.

“The general public and particularly members of Ekehuan community are hereby advised to keep off the Nigerian Army Range area throughout the duration of this exercise.

“Members of the public are equally enjoined not to panic on the sound of firing of live ammunition as adequate measures have been put in place to guaranty safety,” he added.