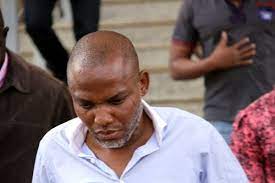 The leader of the proscribed Indigenous People of Biafra (IPOB), Nnamdi Kanu, has been brought to court by officials of the Department of State Security (DSS) for his trial.

He was brought into the courtroom amid heavy security with journalists denied access to film or take pictures of him.

DSS officials had earlier set up a barricade at the entrance of the Federal High Court where the case is to be heard and they prevented reporters and officials from gaining entry, resulting in angry scenes and arguments.

This comes three days after the Federal Government filed seven amended charges bordering on treasonable felony and acts of terrorism against him.

The trial Judge Justice Binta Nyako had adjourned proceedings till today due to Kanu’s absence in court on Monday, insisting the trial will not go on in his absence.