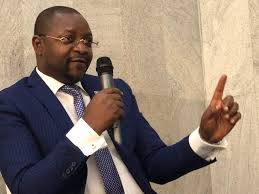 Sunday Dare, the minster of youth and sport development said there is nothing wrong in having godfather in politics as long as competence is accorded priority.

At the unveiling of lead generation initiative, a non-governmental and non-political organization created by businessman and lawmaker representing iseyin/itesiwaju/kajola/iwajowa Federal constituency in Oyo state at the federal house of representative, Hon. Shina Peller

The sport minister said that in Nigeria they are called godfather, while in other countries the name is deferent. He made this clarification while he was asked a question on why the youth are not participating in politics and the necessity of having a godfather,  .

He said, “The definition of godfatherism is not a monolith. In the context of our own politics, a godfather is someone who sits there, decides and takes all the decisions, decides who gets what, whether it is resources or positions.

“The concept of godfatherism simply means that there are some individuals or influential leaders – who can be in block or individuals – who have the levers of control when it comes to political decisions and appointments.

“For me, in its entirety, godfatherism is not bad. But godfatherism that sacrifices competence for something else is bad.”

In his submissions, the governor of Niger State Governor, Abubakar Bello; and former Speaker of the House of Representatives, Yakubu Dogara, looked at the leadership process in Nigeria,

Both of them agreeing the country needs a new crop of leaders that will navigate the country out of the present situation the country is at now.

The former speaker observed that people are be elected and appointed based on the loyalty to their political parties and their various leaders, he said this will spell doom to the country if it is not checked.

the governor of Niger State Governor, Abubakar Bello and the former speaker of the house of representatives Hon. Yakubu Dogora were both guest in the launch of the initiative.