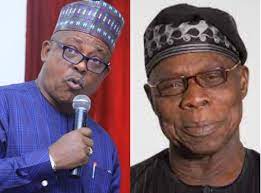 Former President Olusegun Obasanjo has asked political elites and the Federal Government to prioritise the security and economy of the nation, rather than the current agitation about the 2023 general elections.

He believes while the polls are equally important, the major focus should be on the challenges facing the country and impeding its growth and development.

The elder statesman made the call on Thursday when he met with the National Chairman of the Peoples Democratic Party (PDP), Uche Secondus, at his residence in Abeokuta, Ogun State.

He decried that the country has not attained its destined position in the comity of states after many failed opportunities.

Despite the current situation which he described as bad but not unredeemable, Obasanjo is hopeful that the country will be great again with justice and equity.

In his remarks, Secondus commended the leadership quality of the former president and one of the founding fathers of the main opposition party.

Amid the recent disagreements within the party, he is confident that the PDP is emerging stronger ahead of the forthcoming elections.

“We discussed at length and he has rekindled hope as far as we are concerned that Nigeria will be great again, and we are going out here with our hope strengthened that by the special grace of God, we will have a (better) country,” Secondus said.

After the closed-door engagement which lasted about two hours, Obasanjo and Secondus were received at the board room of the Olusegun Obasanjo Presidential Library by members of the PDP in Ogun State.

Addressing the party faithful, they called for all hands to be on deck to rebuild the fortunes of the country.