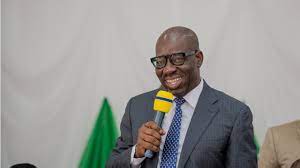 Governor Godwin Obaseki of Edo State has dismissed the congratulatory message from the former chairman of the All Progressive Congress, Adams Oshiomhole, and the party candidate of the September 2020 governorship election, Pastor Osagie Ize-Iyamu.

While addressing a large gathering in Benin City, the state capital, on Tuesday as part of the celebration to mark Friday’s Supreme Court victory he said, if the opposition party leaders were serious about their congratulatory letter, they would have printed it on a letterhead paper with signature rather than posting it on the internet.

According to him, Edo will never fall for such cheap messages called congratulatory letters, they are not serious, ‘na today, na today we do election, na today we win’. They are full of tricks.

“The APC in Abuja is being run just like what they did in Edo when they were in power in Edo State. There is a problem in Nigeria. The country has money but until we change our mind set that taxpayers money must be used to work for the people and not for very few. We have to pray that what happened in Edo will happen in Abuja.

‘’The only party that has the right people for the job is the People Democratic Party (PDP) come 2023. Forward ever, backward never”, Edo must move forward, he added.