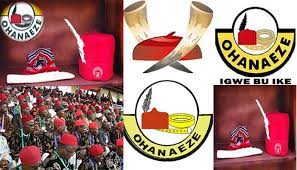 In spite of efforts being made by some sections of the leadership of the Igbo to disown the current violent agitations for a separate state of Biafra, the Coalition of Northern Groups (CNG) has insisted that they should not be believed and only a referendum for Igbo exit could provide final guarantee for a peaceful Nigeria.

In a statement issued on Monday by Abdul-Azeez Suleiman, the CNG Spokesperson, the Northern Coalition said it was important for Nigeria to see through this hypocritical desperation by the Igbo leaders to buy time to restrategise for a deadlier onslaught for Biafra as an afterthought, following the exposure of the extent of their complicity in the sponsored Indigenous People of Biafra (IPOB) secession project.

Today, the CNG said, everyone could sense the weakness in the muffled boasts by the Igbo leaders which only strengthened the concern that Nnamdi Kanu, the fugitive leader of the Biafran insurrection, was in total control of the vast majority of Igbos and the way they think.

“With the level of commitment of the Igbo public to the point of young men killing their parents who dared oppose Kanu’s activities, the rest of the country cannot be expected to accept to continue as a nation with the Igbo on the apparent weakness of the assurances of a handful of affrighted Igbo leaders.”

“We also consider the sudden contraption by a certain section that calls itself “northern Igbo” as a more latent, disagreeable and unacceptable threat to the North and its people than their brethren that fight us from their South Eastern enclave.”

“This is because their presence within the deep hinterland of the North and the permanent nature of that presence, accord them undue advantage over the trusting indigenous northerners who are steadily weakened by a carefully orchestrated, widespread drug war and clandestine spread of arms by these settlers,” they alleged.

The CNG noted especially, the alleged “false demand for fairer and more justiciable distribution of resources being put forward by the Igbo leadership as partial justification for the actions of their youth and say it is insulting, false, diversionary and desperate.”

“Contrary to the Igbo leaders’ claims of marginalization premised on falsehood and deceit, records of history show that the Igbo, having produced the first post independence president of Nigeria, also had the first military Head of State in the person of Aguiyi Ironsi.”

“Whereas even in most of the countries that we look up to as epitomes of democracy today, the vanquished in a civil war are always oppressed, marginalized and don’t enjoy the privileges of equal citizenship for decades afterwards, Nigeria was able to assimilate the Igbo nation back into the Nigerian entity after the civil war faster than most nations.”

“These were rare gestures of inclusiveness and tolerance exhibited and extended to the Igbo in all affairs of the Nigerian state both during the military regime and successive democratic governments despite their role in bringing about the first and only civil war ever fought in Nigeria. From 1979 to 1983 when civilians ruled Nigeria, the Vice President was Alex Ekwueme and the Speaker of the House of Representatives was Edwin Ume Ezeoke.”

CNG recalled that during the military rule of Ibrahim Babangida from 1985 to 1993, Ohanaeze Ndigbo was so pleased with him that he was honoured with the Igbo traditional title of ‘Ogugua Ndigbo’ meaning ‘the Comforter of Igbo People.

“In the eight years of Obasanjo’s Presidency between, there were not less than four Igbo Senate Presidents: Evan(s) Enwerem, Chuba Okadigbo, Adolphus Wabara and Anyim Pius Anyim. While Ngozi Okonjo-Iweala was Obasanjo’s Minister of Finance, Charles Chukwuma Soludo was Governor of Central Bank and Ndi Okereke-Onyiuke was Director-General of Nigerian Security Exchange Commission.”

“Special Adviser to Obasanjo on Political Matters was Chief Chukwuemeka Ezeife. Igbo played other prominent roles that include holding the position of Minister of Defence in 2004 following the exit of Theophilus Danjuma and replacement by Thomas I. Aguiyi Ironsi. Throughout the six years of the government of Goodluck Jonathan, persons of Igbo ethnic group featured prominently in very strategic positions.”

“Thus up to 29 May, 2015, the only position in Nigeria a person of the Igbo ethnic group did not occupy since the return of civilian rule in 1999 is just the Presidency. In the current administration, the Southeast has maintained a fair share of representation in the Federal Executive Council, Nigerian Civil Service and government Ministries, Departments and Agencies (MDAs) including the Ministers of Petroleum, Labour and the Governor of Central Bank of Nigeria. Available data from the Nigerian Bureau of Statistics shows that the five states of the Southeast have more representation in the Nigerian Civil Service and MDAs than any other region of the country.”

“This essentially suggests that they have taken more than their fair share in terms of the standard framework laid down in Nigeria fair representation of all tribes in federal civil service. In the 8th Nigerian parliament, the South East region failed to produce a single person from the ruling party as a representative. Yet, in the interest of national harmony, an unprecedented resolution was made to make an Igbo, Sen. Ike Ekweremadu from the opposition as Nigeria’s Deputy Senate President. It is also evident that the Igbo people are adequately and fairly represented in the security circle of the country.

This is so because the recruitment to these institutions is done according to states and each state is given a fair number of recruits to be admitted into the army, navy, air force and police. It is also clear that the Igbos have their fair representation among the nations’ service chiefs and brigade commands of the Nigerian armed forces.”

“This is also the case with the top ranks of the Nigerian Police, the State Security Service, and other Para military outfits.This is also the case with our diplomatic missions where the Southeast holds major diplomatic offices such as Ambassadors in Lisbon, Brussels, Madrid, Vienna, Washington etc.It is also important to note that the remaining parts of Nigeria, since after the civil war, continues to accommodate the Igbo and have given them space, opportunity and the peace to live and do business.”

“From Kano to PortHarcourt, to Lagos, the Igbo continue to keep and expand their trades and businesses and enjoy a 60 per cent monopoly of the total available commercial, financial, banking and insurance activities. On the other hand, people of the other regions, particularly northerners, could only run small businesses and do menial jobs as the level of hate and uncertainty has denied a favourable atmosphere in the Southeast for any other ethnic nationality to flourish in commerce, education or any other enterprise.”

“Despite the more than a fair share of an economic and political advantage enjoyed by the Igbo, they continue to incite their youth to violence against other Nigerian ethnicities and to prepare them for war against the Nigerian state using distorted versions of the right to self-determination and false claims of marginalization.”

“This inadvertently escalated with the infiltration of the otherwise legitimate and peaceful#EndSARS by protests following Kanu’s incitement to widespread violence and arson that involved the utter destruction of non-Igbo business concerns and cultural monuments while all Igbo business and commercial premises were spared.”

“With this, we wish to stress the need for Nigerians and Nigerian authorities and the International Community to consider the above-stated facts and urgently come to the reality that it is no longer realistic for us to continue condoning and accommodating the ever resurgent unreasonable and unacceptable actions perpetrated against Nigerians collectively by the Igbo that involve taking up arms and declaring war two times previously.”

“CNG is convinced that with the pursuit of this agenda of destruction and collective mayhem, the Igbo fervently hope it will engulf the entire country and bring about another civil war and mass killings. is a general referendum to ensure the Igbo exit from Nigeria. The mindless violence and extremist terrorist actions perpetrated by people who see it as their duty to actualise what their fathers started in 1966 have therefore made it impossible for us to remain one country in the face of such extreme provocations and insistent drive towards civil strife in the country. “

“We insist, therefore, that this diabolical scheme supported morally and politically by the pliant Igbo elites, politicians and the larger population of its people is real and cannot be avoided or deferred any longer. In order to avoid the recurrence of any terrible and momentous events from coming to pass, and to forestall the planned mass killings, untold sufferings and atrocities, we insist on a referendum to take place across the country to agree on an immediate and permanent exit of the Igbo from Nigeria.”

“And in the event that the minority Igbo leaders persist in their current denial, we suggest that a referendum be organised, administered and supervised by the United Nations, the African Union and ECOWAS in the South-East with only its indigenes taking part in the process to determine who actually holds the most influence between them and Kanu.”

“All Igbos must leave the territory of Nigeria and assemble in their designated enclave for the purpose of the referendum during which period no further contacts should be experienced between them and the rest of Nigeria so as not to lead to any interference in the process.”

“The Federal Government of Nigeria shall also have no hand whatsoever in the process, and shall not be called upon to participate or render any assistance whatsoever from the beginning to the end of the referendum. Should there be any need, the participation of other regional, continental and international organisations can be requested to determine the way and manner such a referendum is to be held,” the group said.