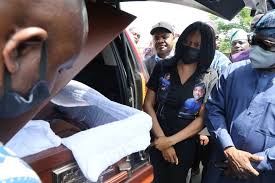 A delegation of the Osun State Government has received the corpse of the late human rights activist, Comrade Yinka Odumakin.

The delegation which included other Osun State Government functionaries was led by the Chief of Staff to Governor Adegboyega Oyetola, Dr. Charles Akinola.

In the company of the remains from Lagos was the wife of the activist, Dr. Joe Okei Odumakin.

The remains of the activist was brought back to Osun his home state ahead of his funeral service this weekend in Moro, Ife North local government area of the State.

Recalls that Dr. Odumakin died on Saturday, 3rd of April, 2021 at the Lagos University Teaching Hospital (LUTH) from respiratory issues due to complications resulting from COVID-19.

Before his death, Odumakin was the National Publicity Secretary of Afenifere, a Pan-Yoruba socio-cultural group.

He was actively involved in National Democratic Coalition (NADECO) activities during the regime of the late General Sani Abacha, was the Spokesman for the Congress for Progressive Change (CPC) which fielded General Muhammadu Buhari during the 2011 presidential election but later became a known critic of the Muhammadu Buhari administration under the All Progressives Congress (APC).