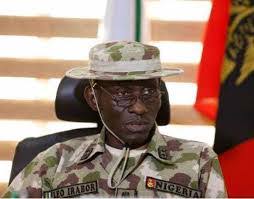 The chief of defence staff, Maj-Gen Lucky Irabor has told the general public that chibok girls were not in the military custody. He said the recent escapee might have benefited from the raid on Boko Haram in Borno and Lake Chad region,

He said  the ongoing operations which is the first offensive in 2021, known as operation Tura Takai Bango might have decimated the sect, and it allies. He was of the opinion, that the ongoing onslaught might have aided the escape of some of the girls, who were on captive.

He said this during, on the spot visit to the Theatre Command of Operation Lafiya Dole in Maiduguri, Irabor said he had no information as at whereabouts of the girls.

“We do not have any of the Chibok girls in our custody, so if they are not with us, we have nothing to confirm again.

“It is the desire of the military to get the Chibok girls back safely. If our operations have helped those said to have escaped, I think we are glad”, he added.

The chief of defence staff,  was accompanied by other newly appointed Service Chiefs, they were at the Command to appraise the security situation in the Northeast and get briefing, and strategize on how to completely decimate them.