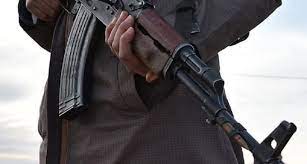 Unknown gunmen have kidnapped eighteen passengers who were travelling along the Eruwa/Igbo-Ora road, in the Ibarapa area of Nigeria’s southwestern Oyo state.

Information around the kidnap remains sketchy but the Secretary of the Farmers Union in Ibarapa, Taiwo Adeagbo, confirmed the incident.

He told a local newspaper that “the bus is still beside the road between Eruwa and Igboora. I have told the police, I told our senator and others. I am saddened by these happenings,”

The Convener of Igangan Development Advocates, Oladiran Oladokun, also confirmed the development to the local newspaper.

“We are still waiting for further directives. We were only told to be prepared because some gunmen kidnapped 18 passengers travelling along Igbo-Ora road. I don’t have more detail for now, police should have the detail because they have been briefed,” he said.

The Oyo state police command is yet to speak about the incident.