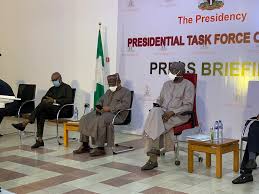 Mukhtar, said that the affected state capital contributed over 95 percent of the new cases recorded in the last six weeks.

Mukhtar, said the presidential task force are supporting the various states of the federation in order to have total compliance of the executive order signed by the president, to curb the spread of the decease.

Recall the executive order of the president restricts gatherings, mandates wearing of face masks in public and gives prosecution powers to law enforcement agencies, with the hope it will stop the spread.

However, some people where brought before a mobile court today in the nation’s capital Abuja for violating the executive order.

In a related development, the Lagos state government has send a clear warning to the resident of the state that the government will enforce the order to the fullest.