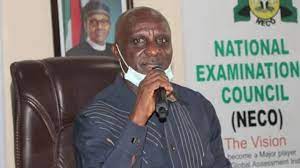 The Registrar and Chief Executive, National Examinations Council Prof. Godswill Obioma has died at the age of 67 years.

A Circular issued by the Director, Human Resource Management of the council, Mustapha Abdul quoted family sources as saying that Prof Obioma died on 31st May, 2021 after a brief illness.

This is contrary to insinuations in the social media that the late Registrar was assassinated in his residence in Minna.

The Circular enjoined staff of the Council to remain calm and prayed for the peaceful repose of his soul.

He was appointed Registrar of NECO on 14th May, 2020 by President Muhammadu Buhari.

late Professor Obioma was a former Executive Secretary of the Nigeria Educational Research and Development Council.

Until his appointment as Registrar of NECO, he was the Ebonyi state Resident commissioner of the Independent National Electoral Commission.

The late Registrar is survived by his wife and children.