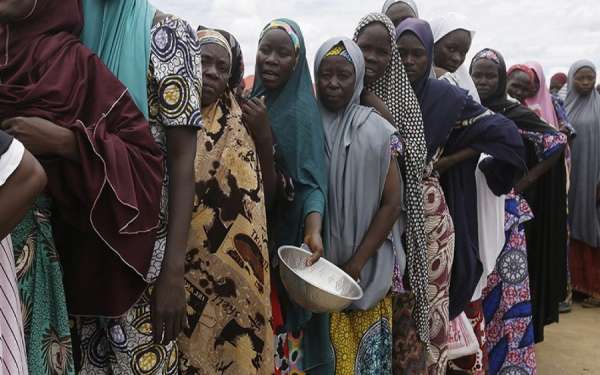 The IDPs who hail from the three Boko Haram-prone states of Borno, Yobe and Adamawa are currently taking refuge in Bauchi State where they have grouped themselves for a common objective, which is to keep body and soul together.

They have gradually pitched tent with their peers at a commercially sex hub of ‘Bayan Garin’, a den of both sexes free persons outside the city wall where the law is either a swindle or hardly implementable, all in the bid to fend for a living.

Worried about this ugly tendency, a group of IDPs tagged Kendai IDPs Association of Nigeria set in to curb this psyche of commercial sex workers from the lethargy back into normal life to positively contribute to the society.

In an exclusive interview with LEADERSHIP  who talked to the leader of the group on how the female IDPs involved themselves into prostitution, a 35-year old.

Hauwa Haruna who hailed Borno said she is the leader of the women IDPs in Bayan Gari, Bauchi.

She said, “I came to Bauchi in the year 2012 following the insurgency in my state where my father was killed. I had five children and I left three with my mother there and carried along the other two with me here in Bauchi.

“When I came here, I met some IDPs in this business of prostitution in Bayan Gari at the outskirt of the city who were from Borno, Yobe and Adamawa states.

“Among those I found in this business, some have parents and husbands killed in the insurgency in those states, they were just living at Bayan Gari fending for their livelihood.

“I knew no other place to go than Bayan Gari where I was shown by some of the IDPs I met in Bauchi, I don’t have anybody in this town besides the IDPs of my ilk, hence my joining of the bandwagon to go on prostitution at this place.

“To date, there are those who gave births here, some in conceptualization stages. We want the state government to come to our aid by getting us out of this ugly business through interventions and assistance to enable us to stand on our feet.

Hauwa said, “I now have two of my children with me whom I took to the house of the IDPs leaders in Bauchi, his name is Baba Kachalla for upkeep because it is unbecoming to take them here to Bayan Gari. Myself I’m not supposed to live here.

“We here at Bayan Gari, we were however made to understand that we have already jeopardized our life, following which my close friend Zulai Barade and I summoned a meeting of like minds to devise ways and means of reaching corridors of the state government and other humanitarian organizations for possible assistance, but we were not resolute to implement our decisions and everything went amiss.

“Female IDPs I knew who were engaged in this commercial sex business have numbered up to about 80 of them or even more”, she revealed.

She explained that there was nothing gainful or rewarding in this business of prostitution they were forced to found themselves in, stressing that she spent about ten years in the saga without showing anything tangible from it.

“I want to get married, I have someone whom I prefer for engagement, but I don’t have the wire-withal to celebrate so Iam looking for assistance from public spirited individuals, government or non-governmental organizations to take the next stage.

Hauwa further explained that a number of them want to get married, others want to acquire skills to fend for a living or even get some labour jobs in the town for livelihood.

Also speaking, the other IDP by name Zulai Barade, (32), said she hailed from Maiduguri in Borno state, her husband was a policeman from Jos, but was killed in Maiduguri by insurgents in the course of his duty and they have five children before the bread winner’s demise.

She explained that they were living peacefully with her for more ten years before he was killed, “I took the children along with his documents to his parents in Jos, but they declined to upkeep the children, instead they simply collected my husband’s documents and directed me to take the children to my parents who were very poor. Iam now in a very difficult condition in Bauchi and do not even know what to do in life.

“I got a rented apartment for my children where I kept and constantly keep visiting them, while I myself reside at Bayan Gari. It was later that Baba Kachalla advised me to look for another job such as washing utensils to be able to keep body and soul together, and I used to do the job at times in the morning or evening, as Iam being paid five thousand naira a month.”

Zulai explained that she has crossed so many hurdles in this wondrous life, “Things are very bitter for me, likewise my children, and I was not able to send them to school, so it was a bad experience for all of us.”

Zulai said that for all these while, she could not boost of anything in life, saying she need assistance especially towards the upkeep of her children, “I’m still a good wife-to-be, it’s only those children I have that prevent some people from picking me as a wife, as they usually say they could not be able to keep the children with them, so they only turns to be using my body for their sexual desires.”

Kaka Modu Abba, the Chairman KENDAI IDPs Association of Nigeria, used to tell us about their efforts in providing assistance to members, especially those commercial sex workers among us, particularly as regards feeding them.

He said: “We have for quite sometimes now devising ways and means of salvaging the womenfolk among us, especially those engaged in commercial sex working at the Bayan Gari suburb of the metropolis, and by God’s grace we are fully committed in this regard, and we were able to observe that there are those among them that prefer to get married.

“We are trying to salvage about 80 women who were deeply rooted in this business of commercial sex working to fend for a living, some would be placed on some skills such as carpentry, tailoring, rearing and farming, among others to make them useful to themselves and the society.

“These people were forced to go into sex businesses, exposing themselves to all health hazards or risk, because they have no option other than this business they found themselves. At last the affected IDPs regretted their actions and sought for

“It is a pity that your Muslim brothers, your colleagues IDPs that fled the insurgency prone areas could not help matters, even those you came with from same town or place. Even if one is a pagan, he needs to be assisted by good Samaritans”.

They seek for assistance and likely interventions from government and philanthropists for salvage from this unbecoming engagements to make life meaningful.

Hajiya Gambo Hassan is an indigene of Borno state who was among the IDPs taking refuge in Bauchi and one of the leaders of the group. She showed her concern on where and how they found themselves, attributing the whole thing to the government for what she said was its lackadaisical attitude to take care of them.

“We that hailed from the insurgency ravaged states of Borno, Adamawa and Yobe taking refuge in Bauchi are in a terrible life condition. Some of our people are forced to turn into beggars roaming here and there to be able to get something to eat. We and our children were all exposed to a despicable way of life”.

Aminu Isah is the Permanent Commissioner II in charge of HISBAH and Shariah matters in the Bauchi State Shariah Commission, said that they were making efforts to take some of the IDPs to their original abodes, especially those who show interest in going back to their individual states of origin.