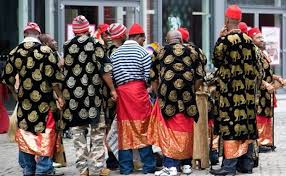 The immediate past chief Judge of Anambra state professor Peter Umeadi, has been endorsed  by the former president general of more than 2000 autonomous communities in the five south eastern state, as the preferred candidate of igbo in the presidential election in 2023

At the gardening in Nri in Anaocha Local government area of Anambra state, the association of south easth past president –general called on every igbos where ever they are to support the candidacy of Umeadi no matter their political affiliations, according to them, he would make proud and he will give Nigeria the best president ever.

This call was made by the national president of the association Nazi Omeife Omeife, in his word ‘with the endorsement, all the autonomous community in south East would star to spread the message.

According to him, the endorsement of Professor Umeadi was in line with the primary vision and mission of the association, which was the pursuit of lgbo unity, as well as lgbo interest in Nigeria, based on the principles of justice and equity. Omeife:

“The Association of South East Past Presidents General, like other patriotic Igbo, has consistently decried the marginalization of Igbo in the Nigerian affairs, especially as it concerns the leadership of the country, the presidency to be precise. “Based on research, we discovered that part of the reason for this marginalization is due to the inability of Igbo to present a candidate with requisite credentials, antecedents, and personal attributes, formidable enough to win nationwide acceptability both in the South East and other Northern and Southern geopolitical zones of the country.

” Following this discovery, we decided to embark on a painstaking search for a credible lgbo man or woman that satisfies the listed criteria. “Consequently, at its meeting held at Umuahia in November 2019, the association appointed a special 24-man lgbo President Nomination Committee, headed by Barrister Nnamdi Nnorom, former Acting PG of Amaigbo in Orlu, Imo State, with a mandate to nominate 20 potential men and women from the South East who are indicating interest to contest for the office of president, for endorsement as lgbo presidential candidate for 2023.

“The committee, in June 2020, in its report at its national central working committee meeting held at Awka, submitted 17 names – 12 males and 5 females, comprising past and serving governors, other seasoned politicians, retired public servants and technocrats and others. “Thereafter, the committee appointed a 10-man screening committee headed by Mr Donatus Omeke, former PG from Ishieki, Ebonyi State to shortlist the list of nominees to three for final selection. “The screening committee submitted three names to the NUJ Press Center, Enugu in November 2020 from which it selected one of the the shortlisted nominees, in the person of Professor Peter Umeadi. The selection was subsequently approved and ratified by all the states central working committees of the association on 18th December 2020. “The association found Professor Umeadi as the most eligible, credible, sellable and usable of all potential Igbo presidential candidates. We found him to possess the requisite credentials, antecedents and character befitting a President of the Federal Republic of Nigeria.

” Omeife said Umeadi was chosen because he had exhibited admirable level of political courage by stepping out to contest for the Nigeria’s highest political office, as against the subservient ambitions of most other lgbo governors and other politicians who are angling for the position of vice-president, thereby reducing Igbo to second fiddle political status.

He added; “As a former Chief Judge of Anambra State, Professor Umeadi displayed the highest level of professionalism, courage, incorruptibility and sense of equity and justice expected of a President. “His antecedents portray a de- tribalized Nigerian with eminent friends and admirers and high level of acceptability from all parts of Nigeria and therefore able to secure votes from the North and South of the country.

“He is well educated and a specialist in one of the most important leadership disciplines which is law, which will enable him as a president to effectively uphold and apply the Nigerian constitution in his leadership of the country. “He is a well known Igbo patriot and one of the most vocal advocates for justice and equity for Igbo.”