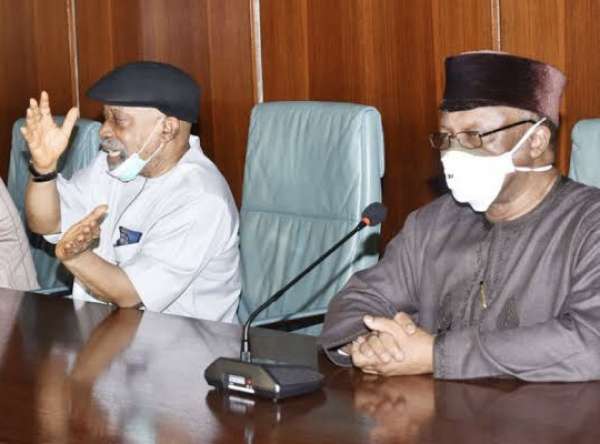 The National Association of Resident Doctors (NARD) has called on President Muhammadu Buhari to sack the Minister of Labour and Employment, Dr Chris Ngige.

Naija News reports that this call was made by the NARD President, Uyilawa Okhuaihesuyi, on Tuesday morning.

In an interview on Channels TV monitored by our correspondent, he said the minimum requirements for doctors to resume is for Buhari to sack Ngige and the Minister of Health, Osagie Ehanire for not doing their job.

According to him, the federal government must also pay resident doctors the over seven months salary owed to them.

Okhuaihesuyi accused Ngige of feeding President Buhari with wrong the information about the ongoing strike.

He stated that the Minister of Labour in a recent interview claimed that almost of the demands of the doctors have been met, which is totally false.

The NARD president also accused the Minister of Health of not paying serious attention to the ongoing strike.

He stated that Osagie Ehanire has only attended a meeting with striking Doctors twice and he rushed out of those meetings giving various excuses.

The NARD president said over 114 members are still being owned and they must be paid, adding that Vice President Yemi Osinbajo remains the only hope of striking Doctors.

Recall that Doctors on August 2, embarked on strike action, accusing the federal government of failing to implement agreements it had with their union on issues including salaries, hazard allowances, and others.

The strike embarked upon by the doctors had been expected to be close to a peaceful resolution until the resident doctors on Sunday told the federal government they won’t sign the memorandum of understanding put on the table by the government team.

The doctors accused the government of insincerity in its dealings, hence their inability to trust what is contained in the memorandum again since they’ve been deceived previously.