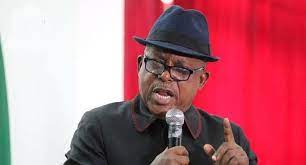 A fresh crisis has hit the Peoples Democratic Party (PDP) as the Prince Uche Secondus-led National Working Committee (NWC) of the party has been accused of mismanagement of N10bn generated from the sale of forms for four years.

The country’s anti-corruption agencies, EFCC and ICPC have been petitioned by one of the chieftains of the party over the matter.

The petitioner, Prince Kassim Afegbua, alleged that the leadership has mismanaged close to N10bn which accrued from the sale of nomination forms for the presidential, gubernatorial, house of assembly and senatorial elections from 2017 to date.

Responding to the petitioner, the National Publicity Secretary of the PDP, Kola Ologbondiyan, described the claim as “spurious” and “irresponsible”.

“The PDP did not raise Afegbua’s fictitious sum of N10 billion as alleged by him. For the avoidance of doubt, the PDP generated the sum of N4.6 billion and raised a budget for its expenditure, in line with all known financial regulations of our party.

“This budget passed through the organs of our party and received the approvals from the NWC, the governors’ forum, the Board of Trustees as well as other organs of the party.

“As a law-abiding political party that respects the doctrine of rule of law and transparency, the budget was presented to the National Executive Committee (NEC) where it also received a final approval,” the party stated.

The petitioner, in a statement, said, “Much of the financial transactions of the PDP under Prince Uche Secondus have been shrouded in mystery.”

He said in the event the anti-graft agency delayed in carrying out its investigation, he would have no option but to seek legal redress in the law court.