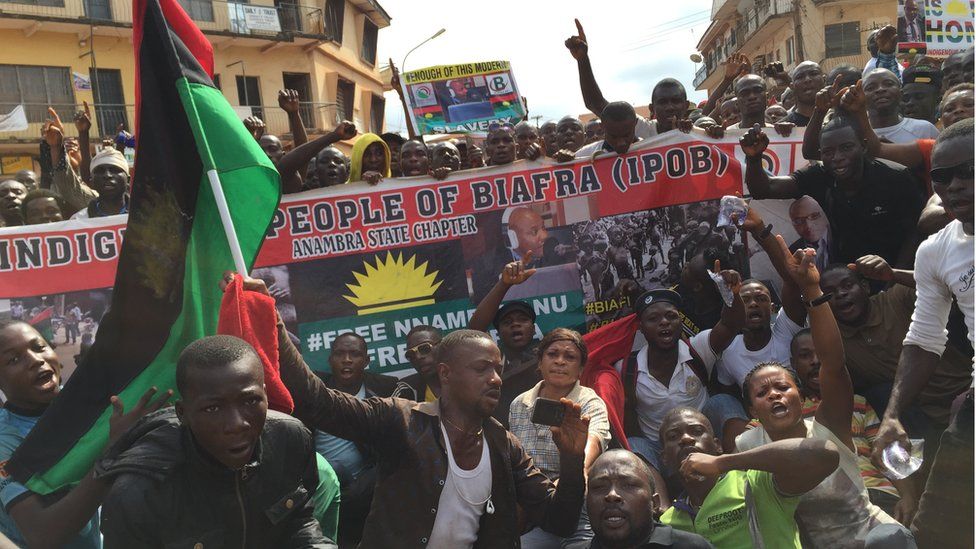 security forces In Nigeria have killed more than 170 peaceful protesters since August 2016, a human rights group has claimed.

Amnesty International said the military used live ammunition and deadly force against pro-Biafra protesters who were campaigning for an independent state in the south-east.

The country’s army said Amnesty was trying to tarnish its reputation.

Amnesty’s report is based on interviews with almost 200 people, alongside more than 100 photographs and 87 videos.

Among the allegations contained in the report are what Amnesty called “extrajudicial executions”, when 60 people were shot and killed in south-eastern Onitsha city, in the two days surrounding Biafra Remembrance Day in May 2016.

“This reckless and trigger-happy approach to crowd control has caused at least 170 deaths, and we fear the actual total might be far higher” said Makmid Kamara, Amnesty’s interim director for Nigeria.

Other victims detailed in the report include a 26-year-old man who was shot in Nkpor, but hid in a gutter, still alive. He said when soldiers found him, they poured acid over him, and told him he would die slowly.

There was another killings in Arondizougo, ideato north local government of Imo state, which was put at two, the villagers ran to the bush to hid from the killing, in a telephone chat with our correspondent one Ikechukwu kingskey Asoh, gave a detailed explanations on how the security forces came to their village and shooting sporadically in the process two of their member where killed, which scared the entire village. Ikechukwu, said the IPOB is a peaceful movement that they will resist all intimidation from the government, and, he and the other members are determined to have their people liberated from this entity called Nigeria.

Another woman said she had been speaking to her husband on a mobile phone when he told her he had been shot in the abdomen. He was calling from a military vehicle, she said, and she heard gunshots. She later found his body in a morgue with two more wounds in his chest, leading her to believe he had been executed after the call.

The human rights organisation said pro-Biafra protests had been “largely peaceful” despite occasional incidents of protesters throwing stones and burning tyres – and one occasion when someone shot at police.

“Regardless, these acts of violence and disorder did not justify the level of force used against the whole assembly.”

But army spokesman Sani Usman that “the military and other security agencies exercised maximum restraints despite the flurry of provocative and unjustifiable violence”.

The two main secessionist groups in the south-east, the Indigenous People of Biafra (IPOB) and the Movement for the Actualisation of the Sovereign State of Biafra, had committed “unimaginable atrocities”, he said.

This included burning and killing people from other parts of Nigeria and forcing them to flee, Col Usman added.

In the past year there has been a series of protests to demand the creation of the state of Biafra in the south-east, home to the Igbo people.

Prominent IPOB leader Nnamdi Kanu has been detained without trial since October 2015, with the government defying a court order to release him.

The mention of Biafra continues to trigger powerful emotions in Nigeria – and memories of the country’s darkest chapter.

In 1967, nationalists attempted to create the independent state of Biafra in the south-east. It was to be a homeland for the Igbo people, one of the country’s largest ethnic groups.

But the bid for independence plunged the nation into a three-year civil war that killed at least a million people.

Almost 50 years on and the bitterness of that period still lingers. Many Igbos claim they are still being punished for the conflict.

In the past year that anger has manifested itself in a younger generation who have staged a wave of protests, fuelled, in part, by high unemployment and anger about official corruption – issues that are hardly unique to the Igbos.

But IPOB appears to have gained momentum after the Nigerian authorities detained Mr Kanu, accusing him of treason.

It is this heavy-handed approach, say human rights groups, that is inflaming the tensions.