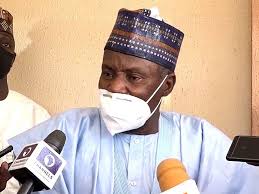 Nigeria’s minister of defence Bashir Magashi, says the West African country has strengthened security at her borders to avoid mass infiltration of Chadian refugees into the country.

There are concerns of a civil unrest in Chad following the emergence of Mahamat, son of the late President Idriss Deby as president which many see as contrary to the constitutional protocol that the speaker of the parliament should take over power in the absence of the president, or in case he dies.

But Mr Magashi expressed optimism that security forces will adequately address the situation should there be crisis.

“We are beefing up security at our borders, following the developments in Chad,” Magashi said on Thursday at a media briefing.

“When we heard of the death of the Chadian president, the government took action immediately. We beefed up security on our borders with Chad, not to allow the influx of Chadian refugees into Nigeria.

“If there’s no security in Chad, there will be a lot of trouble for all neighbouring countries. But thankfully, we have a lot of ongoing military cooperation, through the MNJTF, which we expect to continue. We remain mindful of our borders and developments in Chad.

“The task of ensuring security is not for the security and law enforcement agencies alone. It must be seen as a collective effort that requires credible intelligence that can best be provided by local communities.”