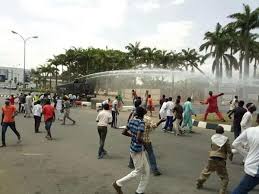 The Shiites has resumed hostilities in the nation’s capital Abuja Nigeria, the Islamic Movement of Nigeria (IMN) clashed with police in Abuja on Tuesday.

The movement has been confronting the federal government for the release of their leader El-Zakzaky The clashed on Tuesday occurred near Trascorp Hilton in Abuja, Nigeria.

One person has been reported dead, while many others sustained various degree’s of injuring a similar protest occurred on Monday also in Abuja.

Five persons were arrested, for attacking personnel and citizens. And also for public disturbances.