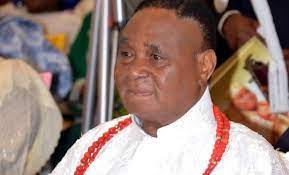 Its was glitz and glamour weekend as the Honourary Romenian Consul to Edo and Delta States, Sir (Dr.) Gabriel Osawaru Igbinedion, the Esama of Benin has celebrated music maestro, Professor Victor Uwaifo, following his attainment of 80 years in age.

The unique and epoch-making dinner party held at the Palacia Garden of the Esama of Benin weekend had in attendance top echelons in the society.

Speaking at the glamorous event, Sir Igbinedion, said that he decided to celebrate the music wizard, Uwaifo, following his great exploit in the society which according to him cut across all sphere of human endovour, adding that the “Joromi” crooner is worthy of celebrating.

Esama informed that he was out of the country when Uwaifo, a Professor of Visual Arts, turned 80 but considered it worthy to celebrate him, Uwaifo, being a “great man”.

“You are a great man, one of the greatest human beings in life. To clock 80 years, you must have a good mind”, he said.

The founder of the Igbinedion University, Okada who went nostalgic, recalling his childhood era with the “If You see mami water” maestro in Benin City said; “I was selling Kerosine while Victor Uwaifo was selling Kola-nuts”

On his part, Barrister Gentle Amegor, while eulogising Uwaifo, sad that Igbinedion is a myth that is globally recognised.

He commended Esama for celebrating the highlife musician, adding that Igbinedion and Uwaifo should be celebrated at all times owing to their contributions to societal development.

Responding, Sir. Uwaifo, said ”Tonight (Saturday night), Chief Igbinedion has surprised me. This is the man who rose from grass to grace, who conquered poverty”.

“Any person who wants to know must be given the opportunity to know and keep knowing. If you go through the crucible of life, then you will know the value of life, you must add principles”.

The renowned musician was presented a 75-inch Plasma Television set and other gifts by the Esama of Benin just as guests were treated to mouth-watery dishes and assorted drinks.