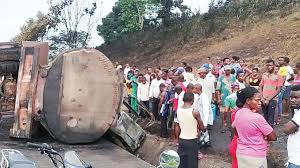 It was gathered that the truck immediately caught fire and burnt down the two tricycles with their passengers including a female and five others.

A source who pleaded anonymity, told journalists that the accident happened on one side of the road which is under rehabilitation by the state government.

He added that the congestion on the free lane compacted the traffic leading to the accident.

According to him, “The truck rammed into the approaching tricycle from the opposite direction resulting in the accident.”

When contacted, Akwa Ibom Sector Commander, Federal Road Safety Corps, Mr. Ogah Ochi, said preliminary investigation conducted by the officers of the corps has indicated that two trucks were involved in the accident.

“Actually six people died. One female and five males. Detailed investigation will come out by tomorrow. Our investigators have gone there and the preliminary report they have given confirms that two trucks were actually involved in the crash, but one escaped.

” The truck that actually caused the accident ran away. It overtook at that point, and this one was trying to veer off from the truck that was overtaking and now rammed into two tricycles.”