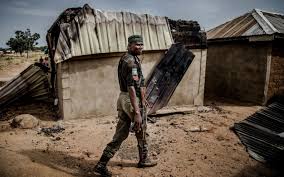 Some collected villages and communities in Ovia north east local government in Edo state came under heavy attack, as the gunmen suspected to be herdsmen have reportedly killed about seven persons, at Ugboke, Oshodi, Okokodo, Ariyan and Yoruba camp on Wednesday.

According to an eye witness, who also is an indigene of the area, gave an on spot analysis and as she put it, they were blood-thirsty herdsmen attacked on the communities.

She said, “The suspected herdsmen took over the popularly known Yoruba camp located in Ovia North-East as a base to launch attacks into various communities in our state.

“Four of the victims were returning from their farm when they were shot and killed on the spot. I was lucky to escape and I am currently in Benin where I am putting up with family members.”

The gruesome attack on the communities was lamented, the incident was reported to the police, and however, the security presence in the area was zero

The incident was confirmed by the PPRO of the Nigeria police Edo state command, Mr Chidi Nwabuzor, who said the command is going after the perpetrators of the dastardly acts, that in no time they will be apprehended, and brought to book.

Another eye witness,  said the police men that came to the area on Thursday, after the incident, only stopped at Okokhua community. And the police insisted that the dead bodies should be brought to Okokhuo.

The communities who are mainly subsistence farmers, are now afraid to go out to their various farms for the daily farming activities.

The indigene are crying for help, asking the relevant authorities to come to their aids in other to get back their lives,

Our eye witness “The DPO and his operatives visited the crime site and evacuated the bodies while moves are on to ensure that the place is calm and lives return to normalcy.”