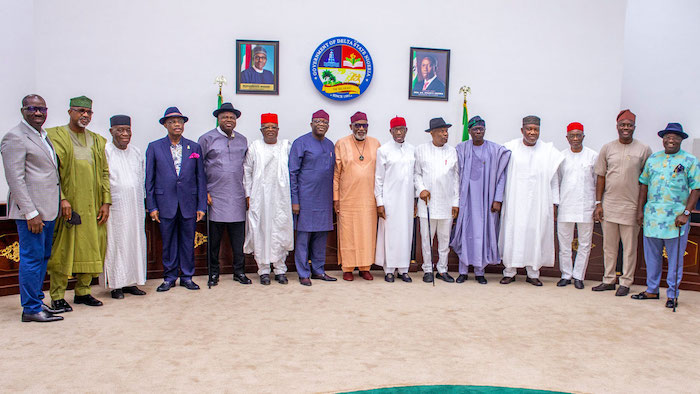 Seventeen governors of Nigeria’s southern states will on Monday converge on Lagos for the second time this year to continue their search for solution to the myriad of problems confronting the country.

At the last meeting, hosted by Governor Ifeanyi Okowa of Delta State and attended by 15 of the 17 southern governors, they arrived at a 12-point resolution, which included the banning of open grazing in all the states.

Sources said the meeting on Monday in Lagos would examine the progress made regarding the Asaba Declaration, examine oppositions to some of the demands and come up with a better strategy for actualising the demands.

The source said: “The governors are working towards a better Southern Nigeria within the Nigerian nation. This meeting is in continuation of that agenda. It is a continuation of the meeting held in Asaba. The southern governors will be looking at the gains of the last meeting and come up with their next move.

“You know the southern governors agreed that the progress of the nation requires that urgent and bold steps be taken towards the restructuring of the Nigerian federation leading to the devolution of power. They want inclusive government at the federal level, state police, a review of revenue allocation formula in favour of the sub-national governments, and creation of some other institutions, which will legitimately advance commitment to the practice of true federalism. Strategies are needed to actualise all these. This is why they are meeting again in Lagos.”

Another source close to Governor Babajide Sanwo-Olu, who is chief host, said in the spirit of Lagos hospitality, the Lagos governor has promised to provide a conducive environment for the 17 governors to brainstorm properly.

During the first meeting in Asaba, the southern governors resolved to ban all forms of open grazing in the southern states of the country.

Although, the governors came short of calling on President Muhammadu Buhari to reshuffle heads of top agencies to reflect federal character against the backdrop of the multi-ethnic and multi-cultural nature of Nigeria, they urged the President to ensure that the sensibilities of the people were respected and reflected in federal appointments.

While affirming the commitment of the peoples of Southern Nigeria to “the unity of the country on the basis of fairness, equity and oneness,” the governors expressed grave concern about the security challenge plaguing the country and charged the President to act decisively to address the situation.

Specifically, the governors of the southern states called on President Buhari to convoke a national conference to address the insecurity and other challenges in order to restore the confidence of the citizens in the Nigerian geo-political entity.

The communiqué said that the southern governors “observed that incursion of armed herders, criminals and bandits into the southern part of the country has presented a severe security challenge such that citizens are not able to live their normal lives, including pursuing various productive activities leading to a threat to food supply and general security.”

But the federal government responded, saying the southern governors’ proposed plan to enforce the ban on open grazing “is of questionable legality.”