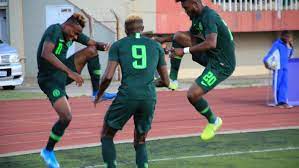 AFCON 2021, the Nigeria’s Super Eagles on Tuesday evening, ended the qualification in a grand fabulous way, when they whipped visiting Lesotho 3-nil at the famous Teslim Balogun Stadium in Lagos

Victor Osimhen, Oghenekaro Etebo and Paul Onuachu were the goalscorers as the West African giants saw off the minnows with a classy display.

The first game against tiny Lesotho ended in a 4-2 victory also for Nigeria away in Maseru months ago.

Wilfred Ndidi had dominated in the heart of the park, while Osimhen, leading the line, was Nigeria’s star performer on the day.

The Napoli frontman put Saturday’s showing in Benin behind him with his fifth goal in qualifiers.

Osimhen also set up Etebo for his strike after the break. He was eventually named the man-of-the-match after an impressive performance.