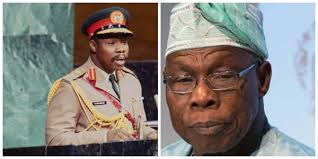 President Olusegun Obasanjo a former president of Nigeria west Africa, gave a clear picture on how he was saved by General Olu Bajowa (retired) in February 1976 in a military coup that Buka Dimka, a lieutenant colonel in the Nigeria army then.

Following a coup led by Dimka which targeted top military officers for execution, Murtala Mohammed, a brigadier general of the Nigerian army and head of state at the time, was assassinated on February 13, 1976.

The coup, however, failed and Obasanjo, who was Mohammed’s deputy, became head of state and ruled for three years.

Speaking at the 80th birthday celebration of Bajowa, held in Igbotako, Okitipupa local government area of Ondo state, on Sunday, Obasanjo said the retired army general indirectly saved him from being killed during the Dimka coup.

“I want to say something about Olu – either he knew it or he didn’t know. When Dimka coup came, if Olu had not been what he is, I would have gone with the coup,” he said.

“Olu is very respectful. He is very conscious of our culture. He had a child, a boy, and wanted to name the child after me. He had to call me early in the morning, that morning Dimka struck.

“And because Olu said he was coming, I had to wait a little bit. I waited beyond the time I would have gone out. Olu then came. He made the request and I granted the request.

“So, I was a little bit late in going on the route that I normally took to work. And Raymond Dumeje went ahead of me and they thought it was me and they shot his car. They shot his car, Murtala was shot. Indirectly, that is how Olu Bajowa saved my life.”

Obasanjo described Bajowa as a committed soldier, adding that he performed well when he drafted him to lead the 11 battalion during the civil war.