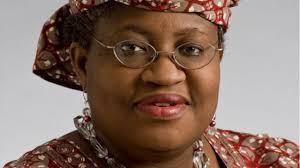 Hours after South Korea’s trade minister stepped out of the race for the position of director-general of the world trade organization, the current president of the United States has threw their weight behind the Nigeria born Ngozi Okonjo-Iweala as the next director general of the organization.

The Friday 5th of February decision by the United States president is what is needed to finally clear the way for Mrs. Okonjo-Iweala to assumed the exotic position of the WTO

What since to be the last hurdle, for the Nigeria born to assumed the position came after Yoo Myung-hee pulled out of the race for reason best known to her which was not disclosed to the public.

According to U.S Trade Representative: “Dr. Okonjo-Iweala brings a wealth of knowledge in economics and international diplomacy from her 25 years with the World Bank and two terms as Nigerian Finance Minister.”

The statement said further “She is widely respected for her effective leadership and has proven experience managing a large international organization with a diverse membership.”

The position of Director-General of the World Trade Center is usually by consensus, all the member country most agree on a particular candidate.

Prompt to now, all member’s except ex-president trump who was a hurdle to making Dr. Okonjo-Iweala next DG WTO..