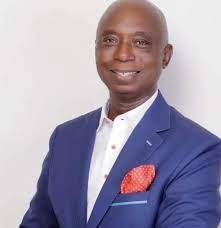 Prince Ned Nwoko on Thursday raised an alarm over an alleged plot and conspiracy to assassinate him. The Nigerian Billionaire and a former house of representatives member, who represented the Aniocha North-South and Oshimili North-South between 1999 and 2003.

The Billionaire raised the alarm at a press briefing he organized in Abuja on Thursday alongside his Nollywood actress wife, Regina Daniels.

The said assassination plot is connected with a parcel of land in his community where is currently building a university, in delta state, the tussle of who becomes the next traditional ruler of his community was another factor, which according to him, has been settled by the elders of the land.

He said the matter had been reported to appropriate authorities who are currently investigating the matter; he said also that the issue of the parcel of land where his university is currently erected has the consent of the elders of the community.

Nwoko, said the assassination plot was exposed in the prison by one Mr. Ossy Bosah who was serving a jail term at kuje prison in the nation’s capital Abuja. He said the said plan was reviewed to Bosah by fellow inmates in the prison.

Bosah died mysteriously shortly after he regained his freedom, according to Nwoko, his death has a lot to do with the exposition of the assassination plot on him, Bosah got a lot of threatened text massages shortly after he was released.

An autopsy was being carried out to ascertain the cause of Bosah’s death, according to him,

Nwoko said, ”Bosah was able to get the information on social media and the attention of my wife, Regina was drawn to it. I then reported the matter to the police and Department of State Security (DSS) and they went and interviewed the inmates involved. The inmates mentioned the name of one businessman who deals in the oil and gas sector as the master minder.”

As regards the university, Ned Nwoko, told the public that the building had gone 95 per cent completion.

When asked about the issue of rotational presidentcy, comes 2023, Nwoko said that who became the president was not the problem but who would fix the economy.

He describing President Muhammadu Buhari as a very honest man who is trying his best to develop Nigeria, Nwoko added that that the economy had remained in dire straits.

The billionaire regretted that Buhari became president at old age.

“I admire the current president Muhammad Buhari because I like honesty. I love honesty and he is an honest man, yes age may not be on his side, yes health might be a challenge because we all have such challenges.

“If he became an elected President in his 40s I am sure there would have been a lot of difference. You know what he did when he was head of state.

“So it is not just about the President or head of State being honest person everybody around him must have to key in and deliver for the interest of the people.

“We just need to address the economy properly and you will see the difference. In the UK, a graduate or artisan that gets a job after three months salary with mortgage financing is more likely to stay on their jobs for 15 to 20 years so they become disciplined they don’t want to lose those jobs because they might be in trouble over the mortgage.

“So it pays them to remain honest and work harder. But there they have a clear vision of what life holds for them, here there is no clear vision everybody is roaming around in circles and this is not good.”

“So time will come when people must decide to choose the right leadership that will give them good governance.

“The banks are not functioning, there are so mortgage, the insurance companies. the sector is dead, the stock exchange is there ceremoniously.

“People should be able to get a mortgage from the bank for House cars that are commensurate with your income.

“You should be able to get finance to buy a car, everything about the economy is wrong in Nigeria so until the bank revisit the fiscal sector is the biggest problem we have in Nigeria.

“Any government that commits itself to these sectors he will bring a lot of progress to Nigeria. In fact, these areas alone can employ not less than 10million Nigerians within two years if properly managed.

“The banks can not on their own be charging interest rates of 14% and even more. Government has to come in and regulate them and fix interest rates and it is a very simple thing to do.

“Government should be able to have a task force that would deal with this sector. Once it is done you will see the economy growing, practically all Houses in Nigeria are built and bought by cash.

“That cash is not helping anybody. That cash is just sunk in there. Cash is not part of the economy. You the owner of the house can not use it to borrow money or get the facility, take this house and give me facility.

“Abroad everybody goes on holiday those who cannot afford it take financing from the bank to go on holiday when you come back over six months you pay. So this sector, the financial sector should be the driving force for the economy.

“When people are gainfully employed they become responsible citizens, we talk about book harm, bandits, kidnappers, herdsmen, look the fact is that these people did not choose to become those things because they love it, it is principally because of the economy, the frustration they feel.

“The pain and the bitterness they feel. There is an urgent need for the Government to be focused on the economy.

“When the economy is good, when people are gainfully employed receiving proper salaries they will be more law-abiding, the crime rate will fall, crime will reduce and things will work out well.

“A few times I had interviews with CNN they paid me for appearing on their TV channel but in Nigeria, it is not like that as the reverse is the case. It is because of the economy if the economy were good and every one of will be earning N5m every month it would have been more honourable.

”We need small businesses to access to finance, we need people to have access to jobs and decent accommodation. If citizens are comfortable and properly engaged, the crime rate will reduce and insecurity would end. The banks need to be functional and responsive and the insurance and Mortgage sub-sectors needed to be more people-oriented. A part of the profits made by banks should be given back to the small businesses as loans.”

One thought on “There is Plot to assassinate me – Ned Nwoko, Regina Daniels husband cries out.”