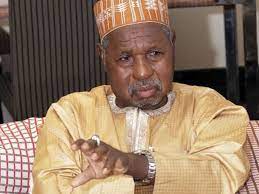 The Governor of Katsina State, Aminu Bello Masari, has urged media professionals to stop giving voice to those agitating for secession.

He said calls for breakup of Nigeria are unpatriotic.

The governor spoke in Kaduna at the weekend while receiving two awards from Nagarta, a Kaduna-based Amplitude Modulation (AM) radio station.

He said the media had played a great role in the development of Nigeria and should not mess up its achievements.

Masari, who was represented by Katsina State Commissioner for Information, AbdulKarim Yahaya Sirika, said the media has a greater role to play to keep Nigeria united amidst calls for a breakup.

“God in His wisdom brought us together and there is beauty in our diversity, just as there is strength in our population, hence the need for us to remain united.

“Those calling for the breakup of this country are either ignorant or enemies of Nigeria. Therefore, the media should stop promoting them and giving them a voice to spread hate and disunity,” he said.