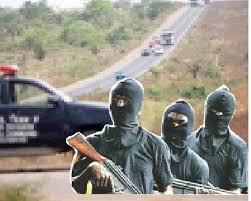 On Monday in Utesi in Ovia North-East Local Government Area of Edo State, three persons were kidnapped by suspected herdsmen on their way to sawmill in the community.

The kidnapped persons includes two women and the driver of a truck they were travelling with.

“The driver was going to the sawmill in Utesi with two women, where he went to carry woods, but on their way, three herdsmen came out and opened fire on them, three of them were kidnapped and we have not heard anything from them till now.

The Benin-Lagos Road had been under herdsmen siege in recent times, this has resulted on the kidnap of many high profile personalities lately.

Among their victims was an American based Nigerian, Prince Dennis Abuda, who was kidnapped and killed by suspected Fulani herdsmen.

When contacted on phone, the Police Public Relations Officer, Edo State Police Command, SP Kontongs Bello’s call was picked by someone who told our reporter that the SP was not available to take his call but promised to contact the DPO and revert.