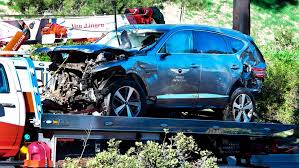 Former world golf number one Tiger Woods is home from the hospital.

After shattering his ankle and other leg bones in a rollover crash, the golf great is recuperating at home, he said on Twitter Tuesday.

“Happy to report that I am back home and continuing my recovery,” he wrote on Twitter.

“I am so grateful for the outpouring of support and encouragement that I have received over the past few weeks.”

He also thanked the medical personnel and staff who had cared for him.

“I will be recovering at home and working on getting stronger every day,” Woods wrote.

Woods suffered “serious leg injuries” to both legs and was rushed into emergency surgery last month.

This was after a harrowing rollover car crash in Los Angeles County, authorities and his manager said at the time.

The 45-year-old golfer was conscious but trapped in the mangled 2021 Genesis GV80 SUV he had been driving when the first sheriff’s deputy arrived after 7 a.m. on Feb. 28.