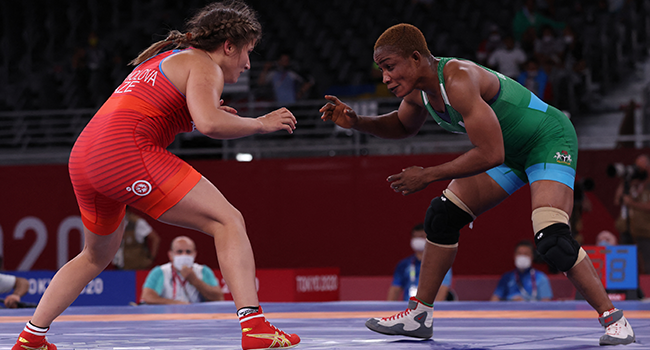 Nigeria on Monday was guaranteed its first medal at the Tokyo Olympics after Blessing Oborududu won her women’s freestyle 68kg wrestling semi-final match.

Although the final match is yet to be played, she is now guaranteed either a gold or silver medal.

Oborududu is also set for the record books as Nigeria’s first ever Olympics medalist in wrestling.

This is a real Blessing to Nigeria,” the Minister of Sports Sunday Dare said, reacting to Oborududu’s feat.

“Thank you Blessing for wiping away the pain of the near misses recorded in other events. Nigerians are proud of you. The display is typical of the never say die Nigerian spirit.

Keep the tempo going until we reach the ultimate which is the gold. Don’t give up the fight until you re-write Nigerian Olympics history with a gold medal in the kitty.”

Nigerian athletes have struggled to make a mark at the Tokyo Olympics amid failed drug tests and injuries.

On her way to the final, Oborududu made light work of Elis Manolova in the round of 16, thrashing the Azerbaijani 13-2 via technical superiority, before securing a hard-fought 3-2 win against Meerim Zhumanazarova of Kyrgyzstan in the quarter-finals.

After a cagey opening moment in her semi-final bout against the 2015 World champion Soronzonbold, the energetic Oborududu burst into action, taking down the 31-year-old Mongolian thrice to eventually win the first round 7-0.

A late fight back saw Soronzonbold score two points, but Oborududu was never going to be denied a place in history as she ran out with a comfortable 7-2 win.

The second seed Oborududu will renew her rivalry with old foe Mensah, as they battle for the ultimate prize – gold medal, with the pair expected to get on the mat around 11.15am Nigerian time.

They last met at the 2019 World championships in Kazakhstan, with the American getting the better of Oborududu on her way to the title.