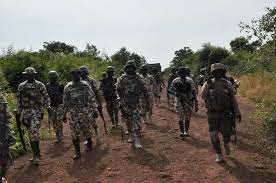 Recovered from the kidnappers were 90 cows and four motorcycles.

He said the operational feedback received from the troops showed that the troops engaged bandits on the Tantatu high ground, as the bandits abandoned their camp and fled further into the forest, adding that the troops also recovered 90 cattle left behind by the fleeing bandits.

The recovered herd will be handed over to the Kaduna State Livestock Regulatory Authority for proper identification, he declared, saying that further clearance patrols to Bawa Rikasa Hill led to the recovery of four motorcycles belonging to the bandits.

According to him, the nine rescued persons will undergo further debriefing and examination before being reunited with their families, just as fighting patrols will continue in the general area.